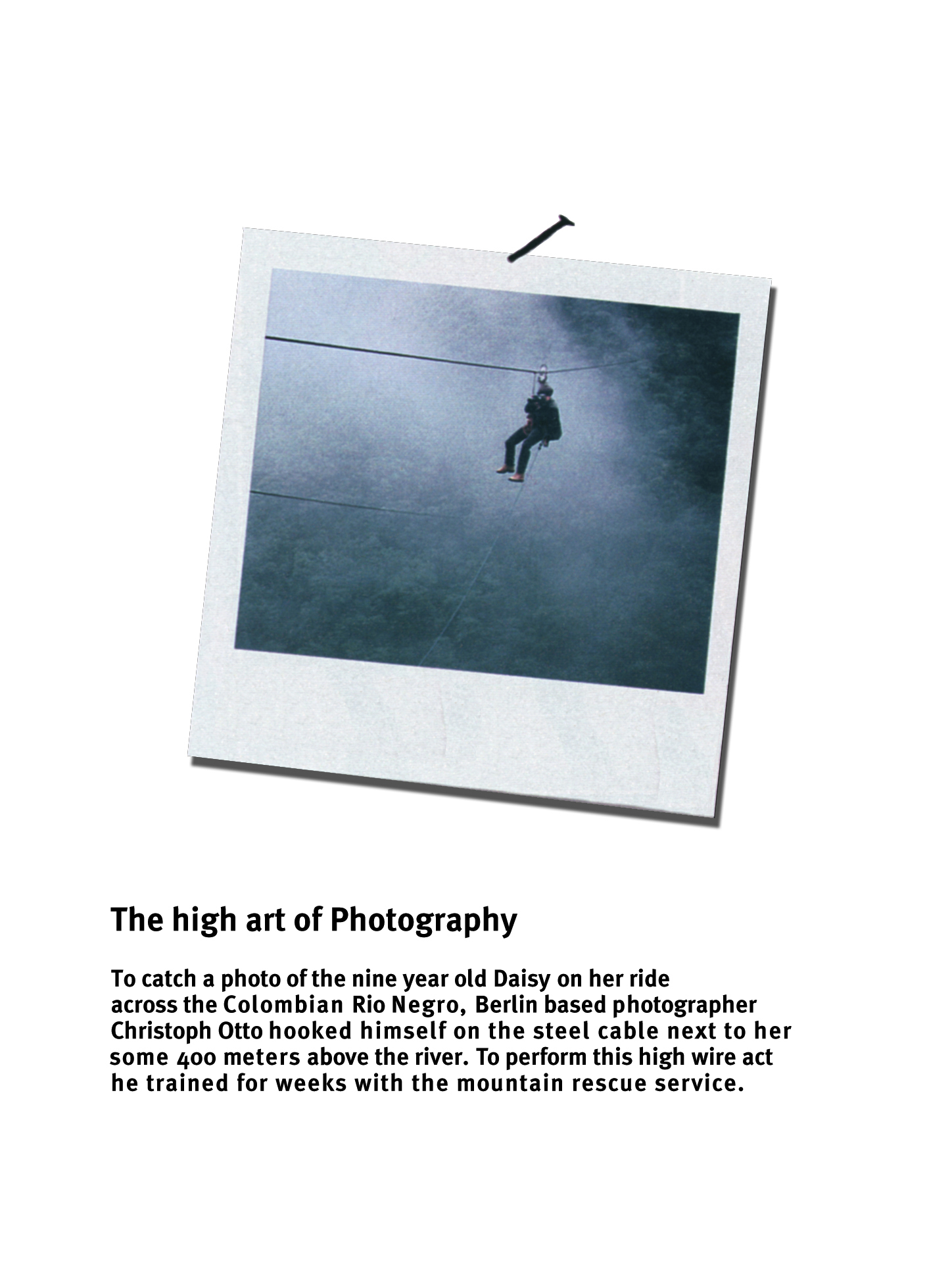 Colombia: And in the depth the Rio Negro is roaring

In the isolated Colombian rainforest where Daisy Mora lives, there is no schoolbus to take students to school on the other side of the canyon. So nine-year-old Daisy uses the only transport system available: steel cables – 1000 meter long – connect the slopes to both sides of the river. With 80 kilometer per hour she almost flies to school. It takes only sixty seconds to cross the abyss of the Rio Negro, which 400 meters below gurgles through the rainforest.

While Daisy Mora is preparing the rocket-like decent to school, her younger brother Jamid looks at her restlessly. With her melancholy voice she soothes the five year old boy by singing the Colombian song of the Vaquero, the shepherd who longs for his sweetheart. Then she attaches herself to the rusty pulley that is more reminiscent of a meat-hook.

Like a snail in its shell Jamid rolls up in the jute bag. Daisy attaches the thirty pound weighing load to the hook of the rope pulley biting her lips from the enormous strain. „Finally“, she groans while the sweat is running down her forehead. Now she knots the ends of a hemp rope into two loops which she hooks on the roll nave. Thus she creates a kind of loop swing in which she sits.

The two kids plunge along the steel cable down into the deepness of the dark-green valley of the Rio Negro. While the roll is sparking and the metal is attling and buzzing rhythmically, Daisy strikes time and again the steel bolt of the rope pulley back into the thread to ensure it doesn´t loosen. With the tempo of a freight-train the children dash through the damp fog. Fourhundred yards underneath them roars the Rio Negro. They rush towards the opposite slope and for seconds the fog allows a view at the Rain Forest, the school building, the lullo-tree, the river, and again at the Rain Forest.

It takes only sixty seconds to schuss along the half mile cable route. The rebounding protection, an old van tire, becomes bigger and bigger. Daisy reaches for the branch fork serving her as a brake. She presses the branch rhythmically against the steel cable until the metal spar-kles and it smells of burnt wood. Her tiny fingers press the wood against the cable. The rest of the swing is taken by the tire. „Puhh“, says Daisy, „we made it again.“

In this valley it is the father who hands the iron roll to his children and explains to them how to get to school with this vehicle. The first ride of every child is a kind of initiation rite, and the whole family takes part. While the father demonstrates the way the brakes must be pressed against the cable, the mother does her best to suppress a hysteric attack by making vehemently the signs of the cross. And when the maiden trip has succeeded, they celebrate, and finally the mother is allowed to cry out of joy and relief.

Twelve steel cables connect the slopes both sides of the river. For the twelve families who are living here in isolated huts they are the only way of contact to the external world. The german explorer Alexander von Humboldt reported in 1804 of natives who used a rope system. The first ropes the Indios clinged to were spanned across creeks and small canyons.

With the beginning industrialisation, the hemp ropes were replaced by steel ropes. Along those the requested raw material wood could be transported quickly and easily. When the wood in regions easily to be reached had been totally felled, new cables were installed within more remote areas of the Rain Forest. When the exploitation of the forest climaxed in the sixties, the destructive lumbering was stopped by law.

The cables, however, survived the end of the boom. Meanwhile the farmers had recognized that the cleared woodland could be used for farming and cattle-breeding. The steel cable, having served for two centuries to transport wood, now became the basis for the opening of the inaccessible regions. For the settlers the cables are the only transport system at their disposal. What they can’t produce themselves the women and men buy in the next village which is six miles away. With the support of the cables, maniok, corn and cattle are transported to the market and on the way back building material for the huts are brought to the forest.

The yellow-feathered Pimparo birds send their high cries into the tropical forest. A rivulet flows down the reddish stones of the steep path which has to be cleared out with the machete and be laid out with additional stones by the men every month. Huge Arranyanes trees with red flowers grow along the path. Daisy and Jamid look over to the other side of canyon. Jamid asks his sister when he will be old enough to use the cable alone. „Next year“, she answers. Then they reach the area of the slope, where the two cows of the family graze.

The hut of the Mora family is built out of wooden boards. Guillermo Mora, a strong man wearing a mustache and with dark-brown smiling eyes has built the hut him-self. He calls the construction „airy“: the rain welled up the boards and there are some clefts as big as a hand where the wind is blowing through. The lady of the house, Nidia Cifuentes, thinks it is useful, this way she can always watch the children and the permanent smoke of the open fireplace in the kitchen can evaporate when she is cooking rice and beans. Guillermo and his wife share their only bed with the four little children, whereas Daisy and Jamid sleep together on a mattress on the ground.

In the evening, Guillermo lightens the oil-lamps. At sundown he sits down on the doorstep of the passage roofed  with some planks which separates the only two rooms, the kitchen and the bedroom. Smoking a cigarette, he tries to forget his hard work the earnings from which are hardly sufficient to feed the family. Harvesting the bananas, fixing the beans, digging the field, felling trees secretly, lugging fertilizer and pesticides, caring for two animals – what an awful lot of work. Guillermo tries to kill the pain in his bones with nicotine when spirits and beer are not available.

Nidia Cifuentes starts the preparations for the mountain festival. She lets the beaf rest in a mixture made of fermented rice, salt and onions. At noon, all families assemble. The noise of playing children mingles with the songs of the music group „los autenticos del campo“. Today the new school building is to be inaugurated. The US oil company Chevron is the sponsor. In the school building the priest has erected an altar with the help of some benches and the women have decorated the room with flowers.

Mother Mora cares for the material well-being. She cooks the meat on the charcoal grill. When the people run out of beer they start dancing. In the meantime Daisy’s uncle Ciro provides new drinks. When he flies back in from the other side of the valley, the fiesta has reached its climax. Ciro carries his savings on his back, or what once were his savings. He invested them in twenty bottles of beer, each of them carefully packed into newspaper. “I have to share with other people“, he comments under the critical view of his wife.

Ciro’s smooth walking ressembles that of a cat. His eyes are deep and clear like water. He greats everyone with a tender touch on the shoulder. He is called „the angel of the water“ in the village. It happened like this: five years ago, Ciro was bitten by a poisonous snake. Near death he managed to cross the torrential river. Like an angel he stepped from one stone to the next and found his way where there was no way.

„In the hospital I dreamed of the God of the water. I prayed to God and bid him to prove his existence to me by making the river swell. The following day during a storm the river overflowed the bank and destroyed five houses. I almost died a second time – out of grief. I did not want to harm anybody“, Ciro tells in his soft, impressive voice. And he adds: „Now I know: here in the country of the waterfalls there is the God of the winds, the God of the earth, the God of the trees and the Virgin of Chirajara, the saint who protects all the cable people. Therefore our children will survive this world on the cable until the government will construct a bridge.“